1- Prelude: an accident waiting to happen

In the June 1983 issue of the IAEA-bulletin, Mr. B. Semenov, Deputy Director General, Head of IAEA Department of Nu-clear Energy and Safety, sums up "many factors favoring the channel-type graphite-uranium boiling-water reactors" and concludes: "The design feature of having more than 1000 individual primary circuits increasing the safety of the reac-tor system – a serious loss-of-coolant accident is practically impossible." (page 51).

1972
In 1972 a discussion took place in Kiev about the type of nuclear plant to be built at Chernobyl. Chernobyl's director, Bryukhanov, supported construction of Pressurized Water Reactors (PWRs). He informed the Ukraine Minister of Energy, Aleksei Makukhin, that an RBMK (a boiling water reactor) releases forty times more radiation than a PWR. However, the scientist Alekzandrov opposed this, saying that the RBMK-1000 was not only the safest reactor, it produced the cheapest electricity as well. For this reason it was decided to build the RBMK pressure tube reactors.

1979
February-March: according to data in the possession of the KGB, design deviations and violations of construction and assembly technology are occurring at various places in the construction of the 2nd generating unit, and these could lead customary for all sections of public employment to have their own special day, when they receive public acclaim for their work and are given extra bonuses.
That the production of electricity started on 20 December is quite remarkable, because usually there is a time lapse of about six months between the completion of the construction and the plant becoming operational. On this subject Zhores Medvedev noted that it was common practice in the Soviet Union for people to declare an industrial project to be ready for operation on the understanding that any problems will be solved as quickly as possible. In this way, the production plan already set can still be met. Besides which, not signing the declaration on 31 December 1983 would have resulted in thousands of employees missing their chances of bonu-ses and other extras. This concerns bonuses of up to three months salary extra. Later it became apparent that in the period up to 1985 the turbine had been tested, but without results. The question is still why the test was not repeated again immediately, but had to be left until April 1986. 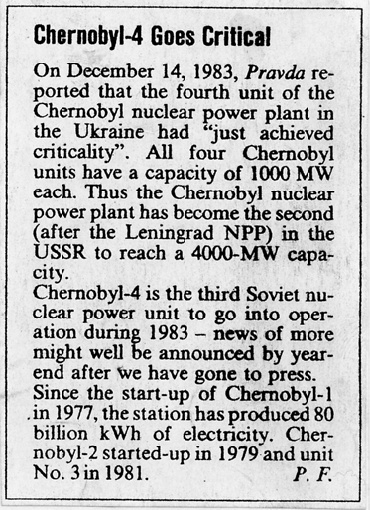 1984
In April 2003, secret KGB documents released in Ukraine show that there were problems with the Chernobyl nuclear plant. One 1984 document notes deficiencies in the third and fourth block, and also of poor quality of some equipment sent from Yugoslav companies.

1985
April: The Minister of Energy, Anatoly Mayorets, decreed that information on any adverse effects caused by the functioning of the energy industry on employees, inhabitants and environment, were not suitable for publication by newspapers, radio or television. On 18 July 1986, shortly after the Chernobyl accident, this same minister forbade his civil servants from telling the truth about Chernobyl to the media.

1986
February: Vitali Sklyarov, Minister of Power and Electrification of Ukraine, in reference to the nuclear reactors in Ukraine, is quoted in Soviet Life magazine (page 8) as saying: “The odds of a meltdown are one in 10,000 years.”
27 March: Literaturna Ukraina (Ukrainian Literature) publis-hes an article written by Ms Lyubov Kovalevska (believed to be a senior manager at Chernobyl NPP) in which she writes that substandard construction, workmanship and concrete, along with thefts and bureaucratic incompetence are creating a time bomb “The failures here will be repaid, repaid over the decades to come.”
It remains uncertain whether the information on the course of the accident is completely reliable. In 1987, five pos-
sible courses of events leading up to the accident were put forward. However, the following account is the one generally accepted.

Times-zones
Local times: At the time of the 1986 accident, Ukraine was one of the Republics of the USSR (Union of Socia-list Soviet Republics) and had Moscow-time (GMT+3). Although Ukraine changed its time to GMT+2 after it declared independence from Moscow in August 1991, times mentioned in the Chronology are historical local times (GMT+3). Times mentioned concerning Sweden's Forsmark, are also GMT+3. Time difference (in 1986) between Chernobyl and Sweden was 2 hours.

25 April (Friday)
13.05 hours (local time): Preparations for the turbine test begin. For this test, the plant's capacity must be reduced and for this reason one turbine is turned off.
14.00 hours: The controller of the Ukraine electricity network requests that the test be delayed. All electricity from Unit 4 is necessary. It is not clear why it was not predictable before-hand that work would have to continue all through Friday afternoon in order to achieve the production planned for April.
16.00 hours: The day shift leaves. The members of this shift have been given information about the test during the pre-vious days, and know about the entire procedure. A special team of electronic engineers is present.
23.10 hours: Preparations for the test start again. The ten hour delay has a large number of consequences. Firstly, the team of engineers is tired. Secondly, during the test, the eve-ning shift is replaced by the night shift. This shift has fewer experienced operators, besides which they were not prepared for the test. Achier Razachkov, - Yuri Tregub and A. Uskov are the operators who were responsible for carrying out the test earlier in the day: later in interviews they declared that test procedures were only explained to the day and evening shifts. Yuri Tregub decides to stay and help the night shift.

26 April (Saturday)
01.00 hours: During preparations for the test, the operators have difficulty keeping the capacity of the nuclear plant sta-ble. While doing this they make six important mistakes.

About:
Chernobyl-4
‹ Chernobyl; chronology of a disaster up 2- The accident and immediate consequences ›