If it isn't a good year for nuclear power it isn't a good year for the nuclear industry either. For example, as published in the last 2011 issue, French nuclear giant Areva is in big financial trouble and in September Siemens decided to quit the nuclear business. The number of companies pulling out continues to grow. U.S.-based engineering firm The Shaw Group announced it would sell its 20% stake in the nuclear company Westinghouse back to partner Toshiba, and in late September, UK company Scottish and Southern Energy (SSE) also said it will pull out of a joint venture with France’s GDF Suez and Spain’s Iberdrola to build a new nuclear power plant in northwest England.

The uranium mining industry has a tough time too; uranium prices were already sreadily sliding down before Fukushima. In 2011, uranium prices continued to plummet, with no rise in sight for the coming year. Uranium companies’ share prices plummeted over the year: Energy Resources of Australia (ERA) shares fell by 82.1%, Cameco by 50%, Uranium One by 45%, Paladin 70%.

In 2011, six new reactors (3977 MW) were connected to the grid, but over double that were closed (13, with a total capacity of 11,358 MW), most as a direct response to the Fukushima accident in March. Construction started on just two new reactors in 2011.

As in the past few years, the new reactors coming online were primarily in Asia: Kaiga 4 (India) Chasnupp 2 (Pakistan), Ling Ao 4 and Qinshan 2-4 (China), Kalinin 4 (Russia) and Bushehr 1 (Iran).

In the summer of 2011, Chasnupp 3, a 315 MW pressurized water reactor in Pakistan and Rajasthan 7 in a 630 MW heavy water reactor in India both started construction. The fall from construction starts in double figures over the last three years is largely a result of Fukushima. (Ten, 11 and 15 reactors began construction in 2008, 2009 and 2010, respectively, compared with just two in 2011.

The UK magnox reactor Oldbury A2 was permanently shut down on 30 June, after over four decades of operation. Oldbury 1 remains in operation but is now scheduled for closure in February 2012, 45 years after its first criticality.

Eight reactors were shuttered in Germany as a result of the political fallout from Fukushima: Biblis A&B, Neckar 1, Brunsbuettel 1, Isar 1, Kruemmel, Phillipsburg 1 and Unterweser. Units 1-4 at Fukushima were also officially closed on May 20, 2011.

Despite the decrease in new construction and the thirteen reactors closed in 2011 the International Atomic Energy Agency (IAEA) predicts the number of operating reactors to increase by 90 (low case) and 350 (high case) by 2030. According to the IAEA most of this growth is expected to occur in countries that already have operating nuclear power plants, especially in India and China.
Nuclear power provided about 13.5 percent of world electricity in 2009. According to the IAEA, electricity demand is increasing twice as quickly as energy use and is likely to rise 76 percent by 2030.

In marked contrast to 2009-2010 with 18 reactors starting construction, no new nuclear construction began in China in 2011. Construction had been scheduled to begin on at least three new Chinese units during the year but the government suspended approvals for new nuclear projects in the wake of Fukushima and this remains the case, however construction continues on over 20 reactors including Westinghouse AP1000 and Areva EPR designs. Countries including Poland, Belarus and Saudi Arabia are gearing up for nuclear new built and work progresses in the UAE where the first APR1400 is due to start construction later this year. 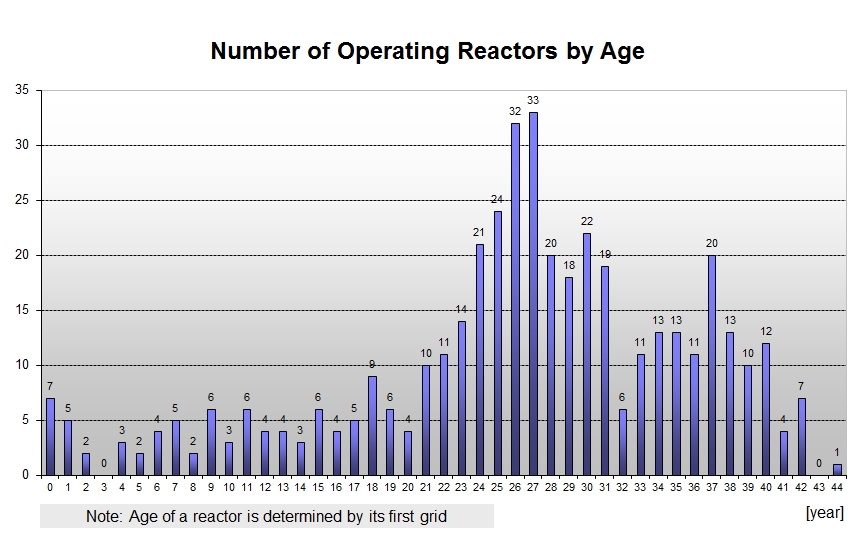