One Rad Fits All? Not Anymore...Actually, Not Ever

If a flu epidemic were to selectively target men for fatalities over women, this would be big news; if a government sponsored vaccine against this flu selectively protected women more than men, I think that would trigger a pretty big firestorm of discussion, if not action.

It is with some puzzlement that I was faced, twenty years into this job at Nuclear Information and Resource Service, questions coming from women (only one or two) asking about radiation impacting women more than men. I asked back, "You mean pregnant women, right? In which case we are talking about the fetus..." To my amazement, came the reply, "No, women, not pregnant women." I was startled, but no, I did not know anything about that. These few women could not give me a source for where they had heard this idea. I was left with a niggle in my stomach, but I maintained my part of the ignorance and silence on this revolutionary news: gender matters when it comes to the Atomic Age.

It was not until 2011 and the triple meltdown at Fukushima, when the Executive Director of NIRS, Michael Mariotte asked me to write a letter on women and breast cancer in post-Fukushima Japan to the founder of the Komen for a Cure Foundation that I realized I had to track down my ignorance.

It is true that Institute for Energy and Environmental Research (IEER) had started a campaign in 2005 on disproportionate impact of radiation--but my understanding from a quick look at a couple of emails with the name "Healthy from the Start," was that this was focused on children. We have long known that due to body mass and rate of cell division in somatic growth children are more vulnerable to radiation impact. I had missed IEER's "memo" that women are too.

In 2011 as Fukushima was melting I was pretty determined to figure this out; it felt like a moral obligation to find out something as big as a gender difference in radiation impacts in honor of the horrendous suffering in Japan. So I looked. At first I found nothing. I decided to
call one of the last remaining icons of the 20th Century radiation research pioneers--Dr. Rosalie Bertell.

Rosalie told me to look at a National Academy of Sciences (NAS) report that ended up being out of print. I called her back when I could not get access to that report. Rosalie said "look at the NAS BEIR VII; only it is not in the text, you will have to look at their numbers. You will find the difference there."

BEIR VII (the seventh report in a series called the Biological Effects of Ionizing Radiation) published in 2006 by the National Academy of Science --is on the one hand considered "the gold standard" on radiation by some, and by others a highly a controversial document. The nuclear industry hates it--it says that there is no safe dose of radiation. My coworker Diane D'Arrigo and a cohort of anti-nuclear activists also hate it since it leaves out so much: there is nothing directly based on Chernobyl data and it employs so many "fudge factors" that they point out how many ways it functions as a "front" for the Nuclear Regulatory Commission to keep saying some exposure to radiation is ok. It felt almost sacrilegious to spend many hours investigating the numbers published in that report, but I did.To my amazement, Rosalie, and the women who came out to my talks were right. Radiation is more harmful to women. The difference is not small. For every two adult men who get cancer, roughly three adult women will get cancer at the same level of exposure; the ratio holds for fatal cancer too. IEER is also right: little girls are the most vulnerable. They are twice as likely to get cancer at some point at their lives than little boys of the same age and exposure level.

Why, in 20 years as a professional in this field did I not know this? Why, now 18 months after I published a briefing paper and then toured the federal agencies to deliver the findings is this still news?

BEIR VII was published in 2006. Amazingly, the authors of this report are mute on this subject. I need to interview them, and plan to as I begin to move into campaign-mode on these issues in 2013. Did the BEIR scientists miss this trend in their own numbers? Were they unwilling to discuss it because there is (not yet) an explanation of causation? Were there women involved?

We cannot attribute the full difference between the genders to body mass or rate of cell division. Comparing the 0-5 years group, the boy and girls in that age group are about the same size (if anything girls are bigger) and ostensibly growing at roughly the same rate. Again, adult women compared to adult men may be somewhat smaller as a group, but that cannot explain a 50% difference.

What also cannot be explained are federal regulators in possession of the same data who persist in setting radiation standards based only on the part of the human life-cycle that is most resistant to radiation's dangers. Some men get sick from radiation; some men die from cancer caused by radiation, but as a group, being more resistant to harm than all other parts of the life cycle means that they should be on a lower tier of consideration when it comes to radiation and protection. Women and children may be characterized as "more vulnerable"--but this implies that there is something wrong with us. There is nothing wrong with us. Dumping ionizing radioactivity into our air, our water, our food, and our bodies is a criminal act. Since our bodies are less resistant, we must resist this insanity more at the social level.

Once I had this information about disproportionate impact of radiation in hand it became incumbent upon me, and NIRS to share it. We now ask you to pick up this task. Women have a right to know; parents have a right to know; husbands, fathers, sons and brothers need to know. We provide to you a factsheet "Women and Children Require More Protection From Ionizing Radiation than Men" in this edition of the Monitor for your use in educating others. To put this bluntly: I am talking about all girls, all women, worldwide; and all ionizing radiation: natural, medical, commercial and military atomic industries, waste; you name it.

We know; and BEIR VII and many other studies, some of which are noted in this issue of the Monitoraffirm that there is no safe dose of radiation. We must stand up to protect ALL of us.

The articles in this edition on the prospective deregulation and release of radioactive metals into commerce, recycling and ordinary garbage and the changes in radiation standards are prime opportunities to act on this concern. These indiscriminate elevations of random radiation exposure to uninformed members of the civilian population and spread of radioactivity into all our systems are irreversible, as is the potential for destruction--twice as high risk for female children than male children--all children many times over adults--and fifty percent more for adult women than men. Again, there is no safe dose--so there should be no increase over natural radiation levels. Zero.

The National Geographic Daily News in 2011 reported that there have been millions fewer girl children born and posits that this may be due to radiation from atmospheric nuclear weapons tests and large nuclear reactor accidents. One of these years we will also admit that a big portion of the cancer epidemic comes from these radiation sources.

As the research as to why continues, we must not only stand, but rise. We need a healthy future together. It is time to base all policies in the public sector on the simple (and sane) assumption that the most vulnerable is the one exposed. 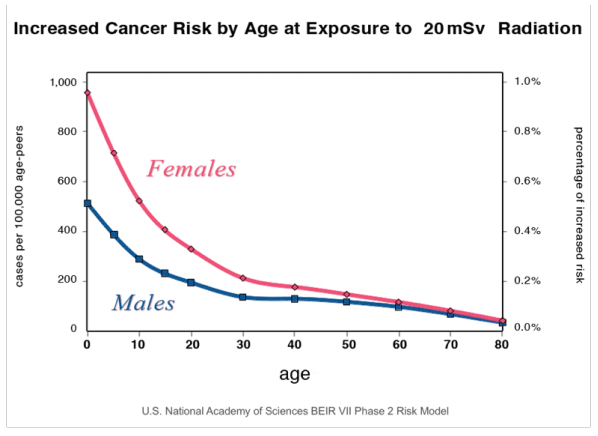