The United Nations Climate Change Conference (COP 21) will be held in Paris from 30 November to 11 December 2015. But that’s not the only thing happening in Paris in those two weeks. Following the attacks in Paris of November 13th, the French government has prohibited mass mobilisation. It is terrible what has happened, but this is not the time to silence the voice of the people. We will be present.
Below a list of the activities the Don’t Nuke the Climate campaign will be offering.

The international climate conference will be held at the Le Bourget site. This will be the 21st yearly session of the Conference of the Parties (COP 21) to the 1992 United Nations Framework Convention on Climate Change (UNFCCC).

Weekend of debates, workshops, screenings and presentations of concrete alternatives in the face of climate change (also including: World Village of Alternatives and Climate Forum). Don’t Nuke the Climate will be present with a workshop and a stand.

For four days, we will transform this artistic establishment into a site swarming with life, with creative proposals, and joyous resistance.

A conference about women and the effects of nuclear radiation. With Nadezdha Kutepova, a video message of Mary Olsen, Arjun Makhijani, and Sascha Gabizon as moderator.

This list will continue to grow when more activities will be confirmed. If you have any questions, please don’t hesitate to get in touch with us. 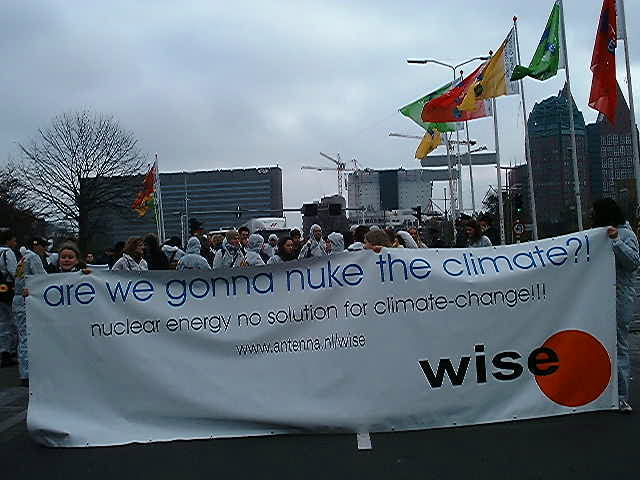 Activists of WISE and NIRS march in The Hague, Netherlands, during COP6, in 2000.